One of this year’s most popular tentative releases in Fortnite, the “Green Goblin,” will be available soon in the Item Shop for purchase. Part of the Spiderman franchise is one of the hottest new drops for Marvel and Fortnite fans. Here we will look at everything we know about the ‘Fortnite’ Green Goblin Item Shop Update, from its tentative release date to its features.

Spiderman was added to the Item Shop for purchase during Chapter 3. His arch-nemesis Norman Osborne’s alter ego is all set to be released soon. The Green Goblin is one of the most popular characters from the Marvel universe.

What have the miners said about the ‘Fortnite’ Green Goblin Item Shop Update?

Trusted data miners HYPEX and ShiinaBr, who have been delivering trustable news about any developments for quite some time, have also released some information about the Green Goblin.

Shiina recently tweeted a glimpse of Green Goblin and costumes for Hawkeye and Kate Bishop – who was later added to the collection. So we can say for sure that exciting things are on their way for fans of Fortnite. 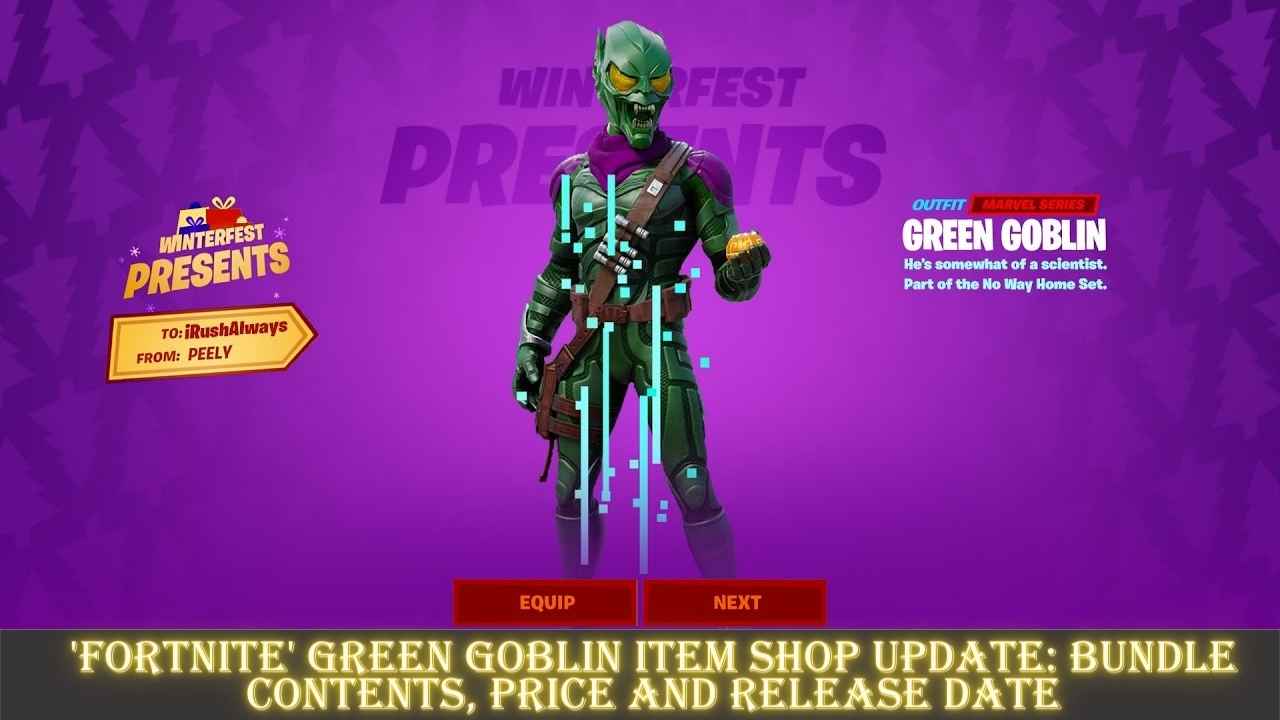 What does the ‘Fortnite’ Green Goblin Item Shop Update Contain?

The main attraction is the classic silver-age comic book look. Green Goblin is seen wearing his traditional purple shawl. His mask is the popular grinning version, and he has pointy elf ears.

iFireMonkey on Twitter shared a sneak-peek of the look after GMatrixGames helped him get the leaked prints. Everyone is hyped about the look, as the movie adaptations haven’t done much justice to the comic book version of Green Goblin.

Apart from the character skin, here are some other things the bundle will contain –

Epic Gamers have not yet released a date for the release of the Green Goblin bundle. However, the miners found him after seeing that the developers had discreetly added him to the code. He is a part of the v19.10 patch.

We can see that the Hawkeye bundle has already been introduced in the Item Shop. You can avail the various features of this bundle right now.

Everyone has bet that the Green Goblin Bundle will be available next week, or at least in the next couple of weeks. Since these people have been right about other things in the past, we must consider this the truth.

Dragon Age 4 Insider Shares: Is Official Release Date Out or Not?

However, if they fail to add the Green Goblin Bundle in the time mentioned above, it will surely be available in the next patch whenever it is released. Keep a lookout for more updates on the Twitter pages of Shiina and other data miners.

Pricing in the Green Goblin Bundle

The Green Goblin outfit is going to be tentatively priced for 1500 Vbucks. It is the same as all new skins, as you could see in previous trends like Boba Fett and Naruto. The entire bundle, including all other appearance items apart from the costume, will be priced at 2500 Vbucks. While you cannot convert Vbucks to dollars consistently, 1500 Vbucks is roughly around $10, and 2500 Vbucks means something around 18 dollars. Fortnite has Vbucks in consistent increments such as 1000, 2800, 5000, or 13500.