Jennifer Garth was born on April 3, 1972 in Urbana, Illinois, and she is known professionally as Jennie Garth. Jennie was the first child of Carolyn and John, who each had three children from previous marriages before she was born. Some of her youth was spent on a horse ranch in Illinois, and when she was 13 years old, she and her family relocated to Glendale, Arizona. Jennie began her career in the entertainment industry by taking dancing lessons and then modelling, eventually catching the attention of Hollywood talent scout and manager Randy James. She attended Greenway and Apollo high schools but left in her junior year to pursue an acting career in Los Angeles (however, she did eventually receive her diploma in California).

In 1989, Garth featured as a guest star on “Growing Pains,” “Teen Angel Returns,” and “Brand New Life,” an NBC series starring Barbara Eden and Don Murray. With her role as Kelly Taylor on “Beverly Hills,” for which she performed in all 292 episodes throughout 10 seasons and directed 2, Jennie quickly earned a global fan base. As well as her role on “Beverly Hills,” Garth has appeared in several other television shows and films.

Eight episodes of the Fox drama “The $treet” had Garth in a recurring role after “Beverly Hills, finished in 2000. In 2000 and 2001, “FHM” magazine named Jennie one of the 100 sexiest women in the world. The WB series “What I Like About You,” on which she co-starred with Amanda Bynes, premiered in 2002 and ran for four seasons, broadcasting a total of 86 episodes.

In addition to her role on “What I Like About You,” Jennie went on to star in the TV movies “The Last Cowboy” (2003) and “Secret Santa” (2003), and she provided her voice for the Fox animated series “American Dad!” and the direct-to-DVD animated feature “Stewie Griffin: The Untold Story.” During season 5 of ABC’s “Dancing with the Stars” in 2007, she and partner Derek Hough made it to the semi-finals.

In the 20 episodes of the CW’s revival of “Beverly Hills, 90210” the following year as,  Jennie returned to her role as Brenda Walsh. During a competition on “Are You Smarter than a 5th Grader?” in November 2008, Garth won $100,000 for the American Heart Association.

She has appeared on several reality shows, including “Jennie Garth: A Little Bit Country” (2012), “The Jennie Garth Project” (2014), “Cupcake Wars” (2016), and “Celebrity Family Feud” (2017), and she recently reunited with her “Beverly Hills, 90210” co-star Tori Spelling for the 2014 season of ABC Family’s “Mystery Girls.” The Mom Gift Box, Garth’s first online subscription box, debuted in 2017, and in 2018, her Travelling Heart Collection for Dune Jewellery went into production. 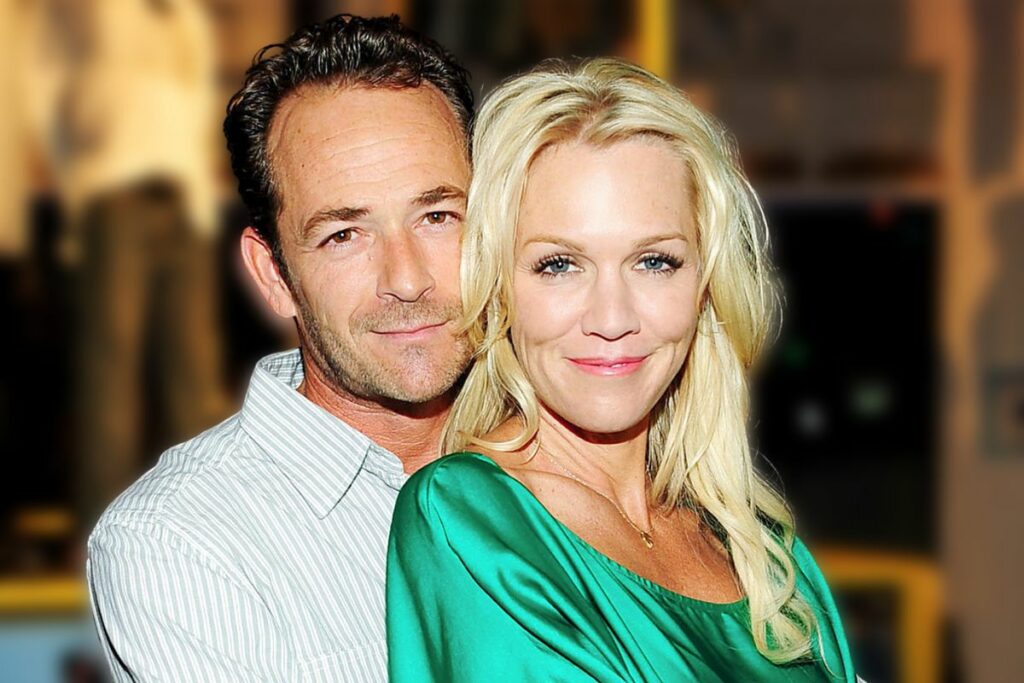 In 1994, Jennie wed guitarist Daniel B. Clark; the pair later separated in 1996. She wed Peter Facinelli, an actor she met while filming “An Unfinished Affair,” on January 20, 2001. Their Roman Catholic wedding mass took place in June 1997, and they went on to have three children together: Luca in December 1997, Lola in September 2002, and Fiona in September 2006. They divorced in 2013. Garth apparently no longer identifies as a Catholic, despite having converted to the faith before marrying Facinelli. Jennie and actor David Abrams met on a blind date in 2014 and were married on July 11, 2015; David sued for divorce in 2018, but they reconciled, and he asked the court to drop the case in February 2019. The leaking heart valve that has been troubling Garth since 2002 is the cause of her health problems.

#AD Having been a caregiver myself, I am thrilled to work with @VoltarenGel to help caregivers take time for themselves by going on #CareWalks #VoltarenGel

Jennie received a Young Artist Award nomination in 1991 for Best Young Actress in a Supporting or Recurring Role for a Television Series, and she went on to win the award for Best Young Actress Founder in a Television Series in 1992. Aside from a Kids’ Choice Award nomination, the programme also garnered her three nominations for a Bravo Otto (which she eventually won in 1994 for). A Prism Award for Amazing Performance in a Miniseries was awarded to Garth in 2008 for her work on “Girl, Positive,” and in 2005, she and her “Secret Santa” co-stars were honoured with a Camie at the Character and Morality in Entertainment Awards.