The Meg was a box office hit, earning $530 million worldwide. It was only justified if it was followed by a sequel, The Meg 2, which producer Catherine Xujun Ying confirmed in 2018, just sometime after the first part was released.

We weren’t much surprised when we heard of the news of the sequel, The Meg 2. But it’s been a while since then. So, when will the movie be released? And what can we expect to see in it?

Here is everything about The Meg 2: The Trench!

An official release date for the shark sub-genre movie hasn’t been confirmed yet. But that makes sense! Since the movie will begin filming in January 2022. And after filming ends, post-production will begin, which will also need a few months. Hence, we think The Meg 2: The Trench will release probably in the summer of 2023. We are sure that the sequel will also be a blockbuster at the box office. After all, a lot of effort and time has been put in to make it happen! 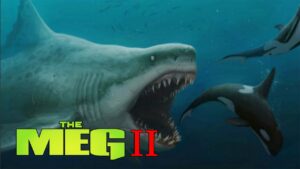 While we don’t have an official list of cast members who will be appearing for the sequel, we know for a fact that Jason Statham will be making a comeback. He will star in the adventure-filled sequel as Jonas Taylor and be a part of the creative team this time.

Additionally, we feel like the movie will be incomplete without the following cast members. And hope to see them again in The Meg 2.

What will The Meg 2 be about?

The first part of The Meg left an open note for a sequel. With Jonas realising that he was in love with Suyin but not ready for a relationship. He also ends up going on a holiday with Suyin and her daughter Meiying. And that’s where the movie ends. Maybe this trip is exactly what he needs. And in the sequel, we will see Jonas finally coming into a relationship with Suyin.

Besides Jonas’s love story, there will be a lot of adventure and sharks in the sequel. Just as the name suggests, Jonas will probably have to go in the water once again, where there will be lots of Megalodons. These Megalodoons have escaped from the trench to create havoc.

Thus, be prepared for an action-packed movie that will keep you on the edge of your seats. The animatics will be great, and the story is bound to make you hooked to the sequel.

Has filming begun for the movie?

The movie will begin filming in January 2022. It was confirmed by John Statham, who said:

“We’re going to start shooting in January if I get my dates right. Ben Wheatley is the director. I’m very excited to work with him.”

Until now, a script has been finalised for the sequel. And Ben Wheatley will be directing it. Regarding his current role in the production of the sequel, Wheatley said:

“I’m storyboarding at the moment. It’s been going on for four months, five months. It’s my happy place. I love storyboarding.”

Because the script has recently been completed and filming is to begin shortly, there is still a lot of time before releasing the trailer for The Meg 2. Moreover, we expect the sequel to release in 2023. And hence, the release date for the trailer will also be some time in 2023, just a while before the actual movie releases.