TIME magazine has recently thrown Biden, the 37th President of the United States of America, under the bus with its new cover. The cover features a ‘bleak’ art depicting the President’s journey of one year since he entered the esteemed oval office. This is the’ commemoration’; the institution wants to pay the President for his incapability and inefficiency at work. The magazine has raised questions regarding Biden’s administration. Instead of changing with his winning, times have worsened with the ongoing covid scenery and other issues such as inflation, crimes, and even as worse as border problems.

It has been precisely one year since the previous controversial President, Trump, had handed over the office to the new, seemingly better President Biden. TIME magazine happily takes a moment to pay their respects to the leader’s weak and disappointing management, as featured in their cover story. 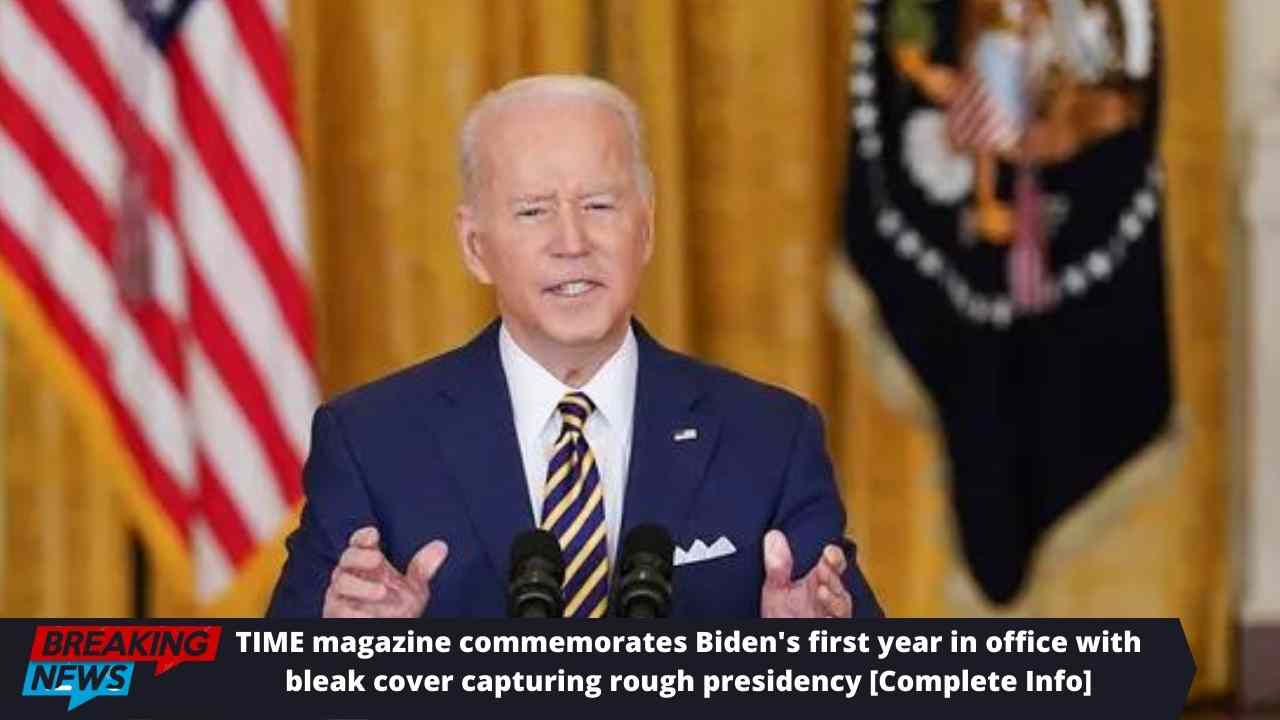 The ‘damming’ art on the cover is striking and has been a part of the rise to all the speculations regarding this news, along with a solid report by Molly Ball and Brian Bennett. They have very strongly raised their queries about the doings of Biden as America’s President and how his administration has lost its way.

The cover art is done by the very talented and famous Tim O’Brien, who has drawn cover arts for the Time magazine for over 36 times and on topics that include the Catholic Church, Osama Bin Laden, and Trump’s duration as the President. His two collaborations with Time magazine, one with Bill Clinton and Bob Dole and the other with the “Grand Old Populists,” were published in 1996 are considered to be pieces of art and kept in the National Portrait Gallery at the Smithsonian in Washington, D.C.

First, the art features Biden on his first day and second, one year after. He stands in despair and ‘hope’ on his first day, looking outside the window. Trump has left the office in a mess with loads of paperwork that represent the issue of the great country. One year later, Biden sits under a gloomy cloud as it rains. The office is cleared up for most of it, but a few files remain on the table, namely, ‘PUTIN’, ‘TRUMP’S ELECTION’, ‘INFLATION’, and more. There are many boxes of the COVID-19 Rapid Antigen Tests that he promised to be made available to every household, but the results tell a different story.

The artwork is a powerful question to Mr Biden, and TIME magazine has raised their questions about what is happening?

The cover story has written, “the pandemic he promised to bring to heel rages out of control. Inflation is at a four-decade high, cancelling out rising wages. The border is a mess; violent crime continues to rise. His approval rating has sunk to the low 40s.” To question Biden about what he has been doing in the oval office for a year now. Voters believed him to be the fresh air in two-term of Trump. Still, people have already started losing their faith in Mr Biden. TIME magazine has called the President a “shrinking figure,” regarding his few press conferences than his predecessors.

Voters are now questioning his capabilities and how Democrats privately acknowledge the public is “losing faith in his leadership.”, as mentioned. Strongly enquiring about the still-rising cases and the dire situations of times where the commoner is suffering, the magazine wrote, “If Biden had one job coming in, it was to get the pandemic under control,” the magazine wrote. He also notably campaigned on a very effective plan. It intended to tackle the virus with the assistance of sound science rather than any denial from Trump. Upon taking office, he installed an experienced team and got vaccines out to millions of Americans in a matter of months.”

The sheer disappointments were evident as Biden had made many promises that were yet to be fulfilled, but time passed. The magazine has rightfully done its job keeping the executive in check and is very much appreciated by those who understand the true intention of this ‘controversial’ cover and story. In the political scenario, the magazine is trendy for having raised its voice against any wrongdoings before.

A year later, Biden sits at the resolute desk, still with mounting tasks and threats and a persistent COVID pandemic all still lingering. The country needs him to rise to the moment and do something before it starts raining and situations go out of the hands of Mr President.