AEW Dynamite Results: On November 19, All Elite Wrestling travelled to Full Gear and stopped in Boston for an episode of Dynamite that advanced its key storylines and feuds in front of its final pay-per-view of 2022. Before her chance to compete in the AEW Women’s World Championship against Toni Storm, Jamie Hayter faced off against Skye Blue in a one-on-one match.

She was searching for one more significant victory to help maintain momentum. In other segments of the program, Bryan Danielson and Sammy Guevara squared off for the second time in a row, and we heard from AEW world champion Jon Moxley and MJF in advance of their enticing main event match.

It was a good way to start the event off with this fast-paced match between FTR and The Acclaimed, two of the most dominant teams in wrestling. The crowd was energized, the energy was high among the four teams, and the babyfaces went over to generate excitement before Full Gear on November 19.

This was placed appropriately given the rest of the card and set the tone for the rest of the program, which will be essential in building anticipation for a Full Gear pay-per-view that lacked the buzz surrounding prior AEW events.

Result: FTR and The Acclaimed def. The Gunns and Swerve In Our Glory

Eddie Kingston is still employed here, hey! This week, the New Yorker made a comeback to competitive sports, taking on longstanding indie foe Ethan Page in the opening round of the Full Gear World Title Eliminator Tournament.

All Ego prevailed in a tough, brutal match thanks to manager Stokely Hathaway’s interference, delivering an Avalanche Ego’s Edge from the ropes as The Firm consolidated their position on the path to Full Gear. You may also check AEW Seems To Have Made A Big Mistake Before The Title Match On Dynamite!

Although neither player could truly afford to lose, it still feels unfair for Kingston to lose to Page, whose momentum has been nonexistent ever since his relationship with Scorpio Sky was dissolved. Kingston is a performer of the main event caliber.

His credibility is damaged by defeating him in this way, which felt very clean given the interval between Hathaway’s meddling and the conclusion. Maybe don’t book Page against someone like Kingston, who is as chilly as he has been during his AEW run, given Tony Khan’s recent attempts to warm up Page, especially last week’s attack on Jon Moxley.

Although Page is extremely brilliant and has achieved such a significant victory, it is regrettable that The Mad King lost.

Following the contest, Wardlow singled out Powerhouse Hobbs and declared his intention to capture every business title. As Hobbs watched, Joe fired a shot to Wardlow’s back of the head with the ROH TV belt, setting him out with the Coquina Clutch.

While fans would have been pleased to see Wardlow and Hobbs compete in a heavyweight match, this felt like a desperate booking to generate some sort of interest in what these guys are doing, similar to the Jeff Jarrett debut a week earlier.

It doesn’t make much sense that Joe would be so incensed by Wardlow’s off-the-cuff comment to attack him without cause since Ring of Honor is meant to be a different organization. The entire Wardlow campaign has been a disaster up to this point, with Khan and Co. destroying all of the goodwill and genuine heat that had been developed up until his historic triumph over MJF in May.

After Saraya stated at Full Gear that she would be making her long-awaited comeback to the ring, Tony Schiavone oversaw a confrontation between Britt Baker and Saraya. While Baker objected to her strolling into AEW and taking advantage of the hard work she put in to help develop it, an emotional Saraya said that the doctors had cleared her.

In response, the British fighter questioned Baker’s star power and asserted that her match with Saraya would be the biggest of her career. It was an excellent promotional segment that made their forthcoming match look exciting and featured some strong mic work from both women.

While Baker confidently held her own, Saraya’s genuine emotion sold the veracity of her statements. This was excellent work and the best the AEW women’s division has produced in a while. Following that, Lethal and Trent Beretta squared off following a backstage altercation involving Best Friends Jay Lethal, Sonjay Dutt, and Satnam Singh.

Lethal targeted his opponent’s knee, which had been hurt in a pre-fight attack, in a competent but unspectacular fight. Berreta made a brief comeback, but Singh and Dutt’s interference allowed the former ROH world champion to win with the Lethal Injection.

In case you forgot what the bigger, and, quite frankly, better, wrestling show has been lately, Jeff Jarrett made an appearance and cut a promo praising Lethal, Dutt, and Singh while also taking a shot at Braun Strowman, Triple H, and WWE.

Grade: A+ for Saraya and Baker’s face-to-face; C for Berreta vs. Lethal and Double J’s promo

William Regal and AEW world champion Jon Moxley entered the ring to address MJFs earlier in the program’s promo. Before dismissing the notion that MJF is the devil, the titleholder made a comparison between his trip and that of the Casino ladder match winner.

On November 19, he made a commitment to keep his belt at the Prudential Center in Newark, New Jersey. This year, Moxley has been on fire, putting together his best 12-month period on the mike and giving some of his most lauded in-ring performances.

Although not everyone approves of him or his working methods, there is no doubt that he has stepped up and taken on the mantle of world champion when AEW most needed him. And we’re not sure it’s over yet.

Although the general consensus will be that MJF wins and retains the title at Full Gear, Moxley still has enough gas left in the tank at this position, so a successful title defence shouldn’t be ruled out. Here is another fantastic piece of content from The Death Rider.

Before being given the chance to defend her championship at Full Gear, Jamie Hayter engaged in a singles contest with Skye Blue, who had AEW women’s champion Toni Storm on her side. Britt Baker’s interference helped Hayter gain the upper hand during the commercial break.

The No. 1 contender defeated Blue with a ripcord lariat when she made a comeback attempt to claim the victory. The storm chased the winning heel to the floor to stop a post-match beating. There is nothing wrong with the fact that this was essentially Hayter’s opportunity to shine.

Blue did fine in her role as the brave babyface, but she was quickly overwhelmed and defeated by her much stronger opponent. So it begs the question: Why did Tony Khan hire Baker to meddle in this situation? Did Blue require protection so urgently that Hayter was unable to just claim a clean victory?

If Hayter is intended to win the title, one can only hope that she will be given the opportunity to cleanly defeat Storm in the middle of the ring, accomplishing what The Good Doctor was unable to do and laying the groundwork for their unavoidable breakup. This is for Hayter’s credibility and obvious popularity. 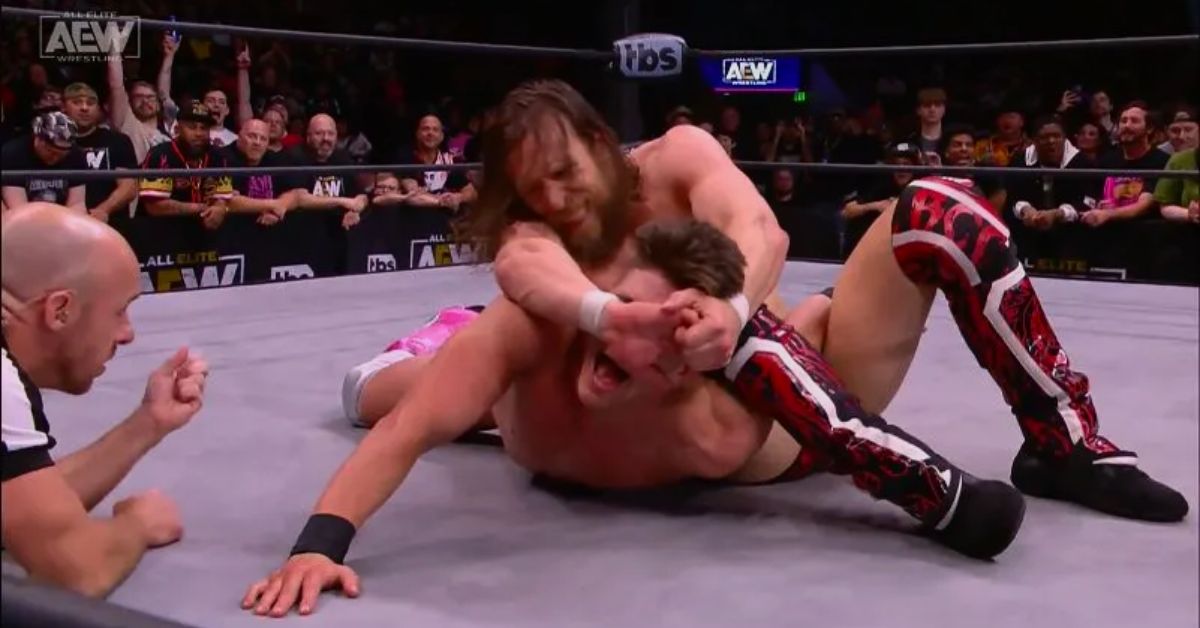 Bryan Danielson was inspired to compete against Sammy Guevara in the main event on Wednesday because of a fantastic match he won two weeks prior. Guevara deliberately failed to qualify in an effort to get an early edge in an effort to outsmart Danielson.

Moments later, he quickly even the bout at one fall apiece by aiming for his opponent’s head. Lately, the tenacious Danielson attempted a comeback, but his foe was always prepared. However, the young heel’s disastrous 630 splash was his undoing as The American Dragon rose to his knees and, after a little struggle, submitted Guevara to win the match.

To help repair his star and regain the momentum he had a year ago at this point, The Spanish God needs to do more of this and less of whatever he had been doing the previous year. Tay Melo is a really gifted young wrestler that enhances Guevara’s presentation and is a tremendous heater on the floor.

However, he will only gain from training with competitors like Danielson. Much more so than some of the other veterans he has seen at this stage of his development who have terrible habits. This was a fantastic encounter that would have been an even better way to wrap up a rivalry if the Four-Way ROH World Championship battle at Full Gear hadn’t also involved Chris Jericho and Claudio Castagnoli.

In spite of the circumstances, it was still a fantastic main event that once again demonstrated Danielson is a unique wrestler and Guevara has all the tools necessary to continue becoming the man AEW bases its future on.

We appreciate you reading this story detailing the AEW Dynamite results. Please share this with your loved ones and leave your comments in the section below. View more hot subjects relating to AEW CM Punk Has Surgery; AEW Gives More Injury Details. Visit domaintrip.com to learn more.

Miranda Lambert Net Worth 2022: How Much Does Lambert Make A Year?